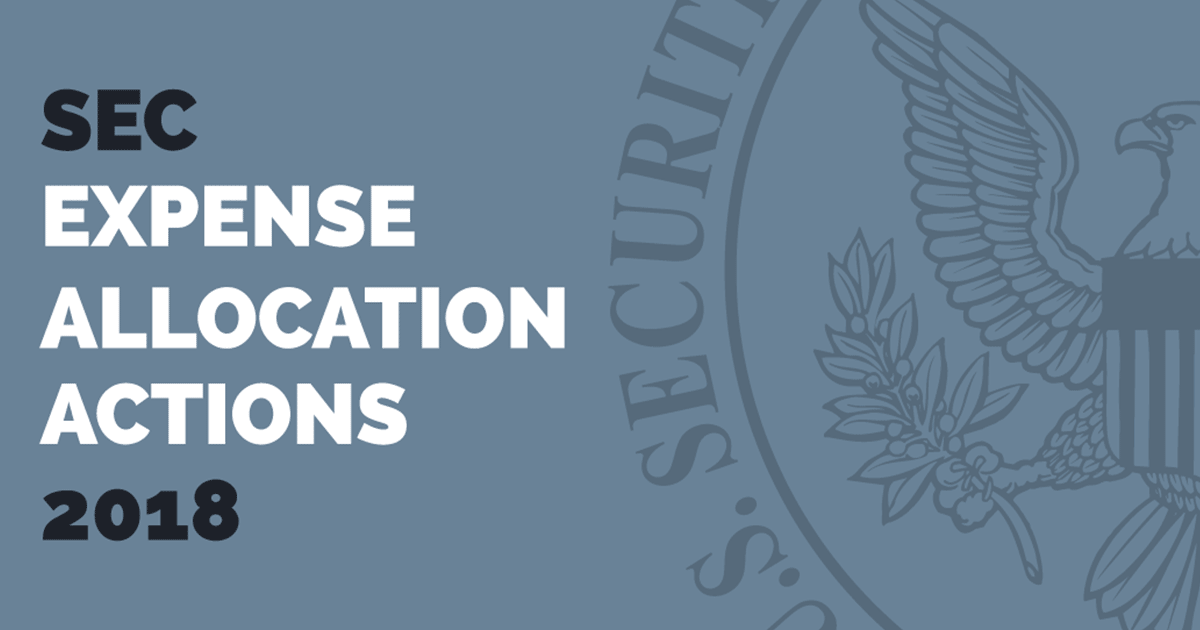 Despite consistent warnings from the Securities and Exchange Commission since 2012, alternative investment advisors continue to misallocate expenses in violation of their fund agreements and the Advisors Act of 1940. Last year the commission publicly settled four misallocation enforcement actions totaling nearly $3.5 million in penalties. We’ve summarized the SEC’s 2018 misallocation settlements below.

In addition, the SEC found Fifth Street failed to properly review the BDC’s valuation models causing one BDC client’s financial statements to materially misstate its net increase in assets and earnings per share. As a result, the BDC issued overinflated shares to the public.

The SEC found Fifth Street willfully violated the Advisors Act and caused its BDCs to violate three other securities laws.

The SEC’s settlement with Yucaipa primarily focuses on two instances where Yucaipa failed to disclose conflicts of interest that led or contributed to the misallocation of expenses.

In the second scenario, Yucaipa used another consultant (“Consultant B”) to simultaneously provide services for its funds and the personal investments of Yucaipa’s principal. Again, the consultant didn’t maintain records of its time and Yucaipa misallocated expenses to its funds that should have been borne by the principal’s personal investments. Compounding matters again, Yucaipa’s principal eventually invested in Consultant B, receiving 25% of its profits. Yucaipa did not, however, disclose this arrangement or offset a portion of this revenue against its advisory fees as required in its LPAs.

In addition, despite correctly allocating a proportional share of its in-house tax specialists who provided services to both Yucaipa and its funds, Yucaipa failed to disclose it was doing so and how.

The SEC found Yucaipa’s conduct negligent and in violation of the Advisers Act.

Yucaipa settled with the SEC to pay $1,863,242 in disgorgement, $71,070 in interest, $1,000,000 in penalties, and to undertake independent compliance consulting. The SEC noted Yucaipa’s cooperation in the inquiry and its prompt remedial efforts including, voluntarily reimbursing the funds for misallocated expenses, expansion of its compliance department, and improvements to its policies and procedures.

Neuberger manages Dyal Capital Partners, a private equity group that specializes in acquiring minority stakes in alternative investors. The private equity and hedge funds Dyal invests in are known as “Partner Managers.” In exchange for its investment, Dyal receives a portion of the management and incentive fees earned by its Partner Managers. To boost Partner Manager performance, Neuberger created a working group called the Business Services Platform, or “BSP,” that would provide Partner Managers advice and support. Neuberger’s LPAs stated Dyal funds would bear costs related to the Partner Managers’ use of the BSP.

The SEC discovered, however, that Neuberger allocated all BSP employee costs to Dyal despite BSP employees spending time on tasks unrelated to servicing the Partner Managers. As a result, about $2 million, or approximately 7% of BSP employee costs from 2012 to 2016, was misallocated to Dyal funds.

Neuberger settled with the SEC for a disgorgement of $2,073,988, interest of $284,620, and $375,000 in penalties. The SEC noted Neuberger’s voluntary remedial efforts and praised its “extremely prompt and responsive” cooperation.

In all, the SEC found Lightyear misallocated $221,000 in shared expenses and failed to provide $1 million in management fee offsets.

Lightyear settled with the SEC for $400,000 in penalties. In its report, the agency noted Lightyear’s cooperation, particularly how Lightyear proactively reimbursed its investment funds with interest before being contacted by SEC enforcement staff.

The SEC maintains an unequivocal focus on expense allocation. The commission issued a formal risk alert on the subject last April and, for the second year in a row, restated expense allocation as a compliance priority for 2019.

Thinking about improving your expense allocation policies and procedures to prevent misallocations and ensure regulatory compliance? Learn how IntegriDATA EAS can help.