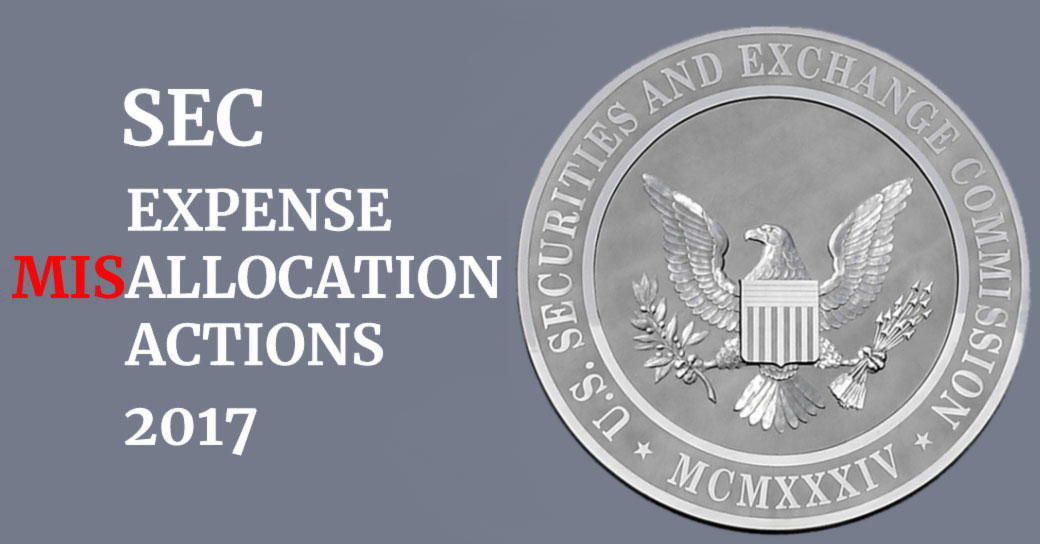 The Securities and Exchange Commission (“SEC”) continues to aggressively pursue expense allocation charges against private equity and hedge fund managers. The agency has publicly settled three misallocation enforcement actions in the past few months netting over $2 million in penalties. We’ve summarized the SEC’s 2017 misallocation settlements below.

Capital Dynamics was aware of its allocation policy shortcomings when it hired a new CCO in early 2014 to strengthen its compliance program. The new CCO conducted a sweeping review of allocation policy and instituted best practices requiring “multiple levels of review” and “escalation procedures” for allocated invoices. Unfortunately, the situation had yet to be fully remedied when the SEC Division of Enforcement contacted Capital Dynamics in December 2014.

The SEC found Capital Dynamics’ legacy allocation policy to be woefully inadequate offering “insufficient guidance [around the] approval of expenses and [providing] little or no review of approved invoices”. As a result, Capital Dynamics had misallocated $1.2 million of legal, employee, and consulting expenses between 2011 and 2014.

Capital Dynamics voluntarily reimbursed the funds the $1.2 million in misallocated expenses. Despite this, the SEC required Capital Dynamics to pay a $275,000 penalty as a condition of its 2017 settlement.

At its CEO’s discretion, Potomac willfully violated the law by misallocating over $700,000 in employee compensation, office rent, and compliance expenses in direct violation of fund offering documents. The SEC found the allocation of the employee compensation particularly egregious as Potomac claimed an employee as a consultant to skirt LPA terms prohibiting the allocation of employee salaries. Compounding matters, Potomac failed to maintain any expense allocation policies or procedures.

In addition, Potomac billed funds for portfolio company expenses without authorization, failed to offset advisory fees as directed, had material omissions in its Form ADV filing, and failed to disclose transactions in audited financial statements.

The SEC censured Potomac and imposed a $300,000 penalty, a considerable sum for a manager with less than $500 million under management.

Under their LPAs, Platinum’s funds are responsible to “pay all expenses related to [their] own operations”. Platinum management regularly co-invests in its portfolio company investments through separate co-investment vehicles, ostensibly under the “same economic terms and conditions as the partnership”. Despite this, Platinum failed to adopt policies and procedures to ensure the proper allocation of expenses. Consequently, all broken deal expenses – including the share that should have been borne by the co-investment vehicles – were passed on to the funds. The SEC discovered Platinum had improperly allocated $1.8 million in broken deal expenses without LPA disclosure since 2012.

In its SEC settlement, Platinum agreed to pay $1.5 million in civil penalties and to a disgorgement with interest of $1.9 million.

The SEC continues to vigorously enforce misallocation charges. There have been eleven public misallocation charges since 2014 with an average civil penalty of $3.7 million. The lack of proper allocation policy and procedure is a recurring contributing factor in each case. The SEC has been clear: investment managers must improve how they perform expense allocations or risk millions of dollars in penalties.